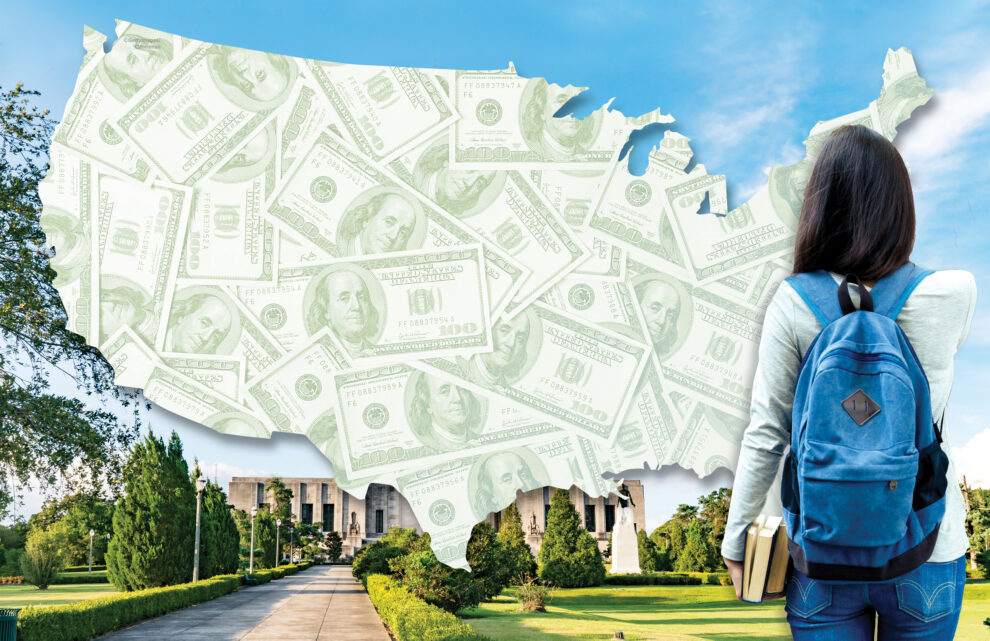 The United States has approximately 4500 institutions of higher education. While there are many characteristics that set apart the American higher education experience from the rest of the world, cost of attendance typically stands out as one of the defining elements and can often be a deterrent to international students looking to study in the United States. Understanding how American colleges and universities are organized and how their cost structures vary is key to finding an institution that meets both your academic and social needs but also fits your budget.

Although they may share the same accreditations and similar levels of prestige, it is important to understand that the public and private systems are not the same when it comes to funding. In general, private colleges and universities can set their own tuition and admission standards and rely on tuition and private donations to filler their coffers. Public colleges and universities, however, are usually subject to rules, mandates and budget guidelines coming from the state governing body that oversees higher education in each state. With 50 different states in the Union, that means there is a lot of variety and different approaches to higher education. Although regional accrediting bodies help to create some consistency when it comes to admissions and academic standards, issues related to tuition are tightly intertwined with state funding, which is driven by taxes.

Taxes, and by extension funding for higher education, can vary widely from state-to-state. This variation means that public colleges and universities use non-resident fees (also called “out-of-state tuition”) to bridge gaps between taxpayer provided funding and the cost of attendance. Some states, like California, heavily subsidize higher education, and there are, therefore, few opportunities for in-state tuition (or non-resident fee waivers). Other states, where there is less state investment in higher education, and colleges and universities rely more heavily on revenue from student-paid tuition, opportunities for in-state tuition are much greater.

There are exceptions to this, as a desire to promote geographical and cultural diversity can motivate public universities to offer in-state tuition both to domestic and international applicants. Other motivations include geographical or free trade determinants, as states seek to solidify bi-lateral relationships with neighbors or important trading partners. For example, many institutions located in states along the US-Canadian border tend to have tuition incentives for Canadians, while many institutions along the Gulf Coast tend to have tuition incentives for students from Mexico and the Caribbean. The Florida-Canada Linkage Institute (FCLI) is a great example of a legislative initiative driven by a socio-political effort to promote connections between Florida and Canada. The FCLI is a scholarship program that, if awarded, offers Canadian students in-state tuition at one of 40 public colleges and universities in Florida, such as the University of Central Florida. Application criteria, deadlines and other details are available online.

Sometimes institutions may engage in a sort of geo-targeting when marketing tuition incentives, even though the benefits may be available to other groups as well. For this reason, it is always worth inquiring about possible non-resident fee waivers, even if you do not meet the targeted demographic. For example, in Texas, many in-state tuition opportunities target students living on the border, but there are many non-resident fee waivers available for which international students of all backgrounds may qualify. One such non-resident fee waiver is an award that is granted in conjunction with an academic scholarship valued at $1,000 or more. While a $1,000 scholarship alone may not seem attractive, when combined with a non-resident fee waiver, the overall value is exponentially higher and can make educational opportunities in Texas much more accessible. You can find out more about various waivers offered at public institutions of higher education in Texas online.

Idaho State University uses non-resident fee waivers to attract highly qualified students and maintain healthy enrollment in programs diverse program offerings. Because ISU is seeking to recruit top non-resident applicants, the criteria for non-resident fee waiver awards are competitive, with the average GPA being 3.5 or higher. Be aware that not all programs may be eligible. At ISU, the non-traditional Pharmacy Program (and other over-subscribed programs) are not eligible for any non-resident tuition waivers. At Boise State, also in Idaho, the non-resident fee waivers are included a part of academic scholarships. They may also be awarded to international students who attended high school in the Idaho. Other universities have similar policies allowing students who attend high school in the respective state to benefit from in-state tuition at public colleges and universities, so if you are currently at a U.S. high school, it is worth looking at in-state options and inquiring about how international students who attend local high schools are treated for residency purposes.

Community involvement and leadership are two characteristics that Kennesaw State University in Georgia seeks when awarding out-of-state tuition waivers.  Available to both first-time freshmen and transfer students, the award process is competitive and students who exceed the GPA requirements are given preference. A personal essay is also required and allows applicants to share how their community engagement and leadership will benefit the Kennesaw State University community. As with most out-of-state tuition waiver opportunities, a minimum 2.5 GPA and enrollment in at least 12 credit hours each semester is required in order to maintain the award. Kennesaw State is a Carnegie-designated doctoral research institution (R2), placing it among an elite group of only 6% of U.S. colleges and universities with an R1 or R2 status.

McNeese State University in Louisiana offers generous non-resident fee waivers through a program called the McNeese Access Award. International students are automatically considered for the award during the application process, so no additional form or request is required. The minimum GPA for consideration 2.35, however, students must be ready for placement in College English and Math, so students needing remedial coursework cannot be considered. Currently, the average student receiving the McNeese Access Award pays approximately $4,300 per semester. Intended to promote accessibility to higher education in Louisiana, the McNeese Access Award encourages diversity on campus.

Other universities have partial non-resident fee waivers that are also worth exploring, especially when these waivers can be combined with other scholarships or are offered by colleges and universities who already boast affordable price points. For example, the University of Wyoming offers the Brown and Gold Commitment Awards that are based on GPA. These awards range between  $4,000 and $7,000 per year. Similarly, the University of Maine offers a special tuition rate for Canadians. While it is more than in-state tuition, this special rate is very advantageous.

In-state tuition opportunities are not always easy to identify when looking online for American colleges and universities. Because many of the opportunities may target special groups or have certain caveats, such as required community engagement, they are not always posted prominently on web pages. The concept is “discounting” in American higher education has increasingly become an open secret. Sometimes this is done with scholarships, and sometimes this is done with tuition fee waivers. Either way, a discount is valuable and can make American education much more accessible. Students and parents are encouraged to ask about in-state tuition options and should avail themselves of reputable resources such as EducationUSA. EducationUSA in Canada, which is an advising network supported by the U.S. Department of State and tasked with promoting educational opportunities in the United States, routinely collects and shares information on tuition incentives and has a university spotlight series that is very useful and relevant. Higher education in the U.S. is a significant, albeit worthwhile, investment, and an informed consumer on the front end makes for a happy student at the back end.

Virtual Exchange: What are students signing up for?