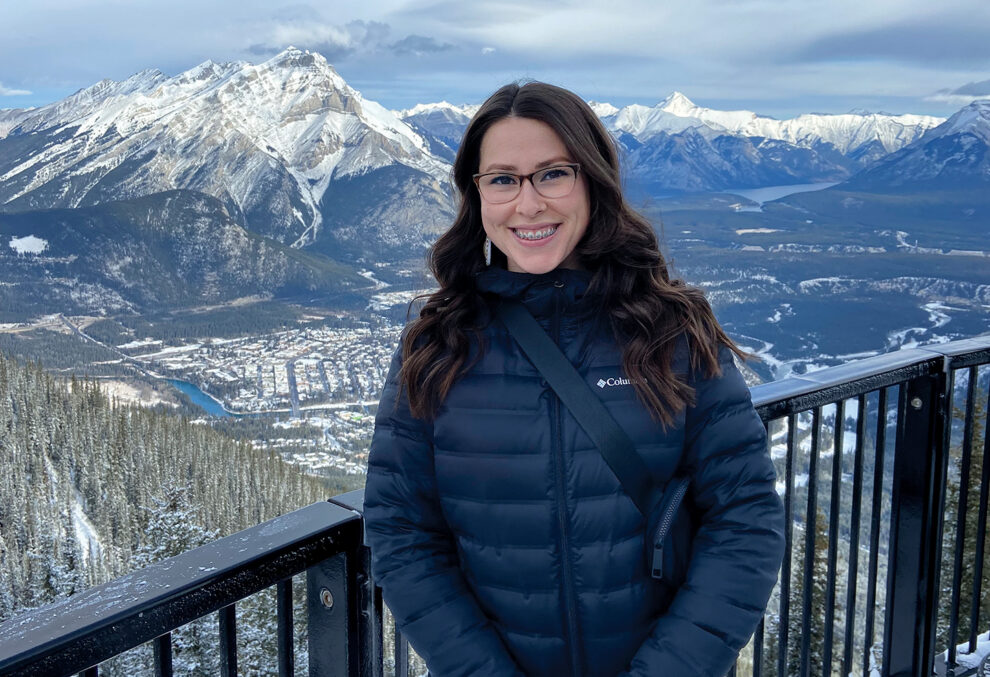 She was initially reluctant to go to the Mohawk College Indigenous Education and Student Services centre (IESS), but a visit from her mother, and a chance drop-in to see a staff member at the centre, changed everything for Abbey Daniel. Over the course of the brief sojourn, she was not only welcomed, but she was also encouraged to apply for a job.

Abbey Daniel is Anishinaabe Kwe with lineage from Wiikwemkoong Unceded Territory. When she was accepted, Abbey didn’t feel especially called to go to the IESS and explore what it had to offer. However, that first experience led to her becoming a fixture at the Indigenous Lounge and a frequent user of the services that the IESS provided. She also got that job. More on that in a minute.

Abbey Daniel enrolled in the Executive Office Administration program and was early in her studies when her mother steered her toward the Lounge at the IESS. That visit led to a brief meeting with Leah Hogan, the Manager of Indigenous Education, who encouraged her to apply to be her Administrative Assistant through the college’s Campus Student Employment Program (CSEP). Abbey earned the position and held it throughout her college experience. She was so good at the job that they extended her contract after she graduated, and is where she continues to work today. Hogan says, “Abbey is such a treasure. We are fortunate to work with her and can’t wait to see where her career takes her.” Abbey also credits CSEP with giving her the opportunity to work one summer at Imperial Oil in Nanticoke, Ontario.

Abbey Daniel was profoundly influenced by her experience at Mohawk College because of their commitment to Indigenous learning and culture. From the academic support—including tutoring, computer access and free printing—to the cultural experiences, Abbey credits the college for embracing Canada’s Indigenous ancestral roots. When Abbey reviewed the Indigenous Education Protocol, she found clear connections to her experience, describing how the Indigenous way is expressed across the campus and, specifically, at the IESS. She felt that the Lounge helped her connect with her Indigenous traditions. She also appreciated the communal meals, the celebration of feasts and craft events (like beading) as being significant for her. Combine these elements with access to Indigenous counsellors and Elders, and it became clear to her that Mohawk’s commitment to her education, as well as her ancestry, was sincere and meaningful.

One memory stood out for Abbey. It was a feast, held around the college’s Christmas break, where she had the opportunity to share a meal with Elder Bertha Skye along with a group of her classmates. There was nothing specific about the encounter—it was more of a feeling that made it memorable. Abbey describes experiencing a profound sense of family and how there was something about Bertha Skye’s presence that made her feel like she was home. It was a memory shaped by emotion and spirit that has stayed with her for years.

Certainly, Abbey Daniel is to be credited for her hard work and commitment to her program. She is also to be lauded for embracing the opportunities offered to her at the IESS. At the same time as is the case with many of the CICan member colleges, Mohawk can pat themselves on the back for creating a space for Indigenous students and promoting Indigenous culture across their campus. If encouraging and supporting the education of Indigenous students is part of our national reconciliation efforts, this is just one example of what a school can provide. And Abbey Daniel is an example of what can be done with plenty of hard work and a little support from her college.

Confronting Our History and Looking Forward 
Reconciliation Through Education