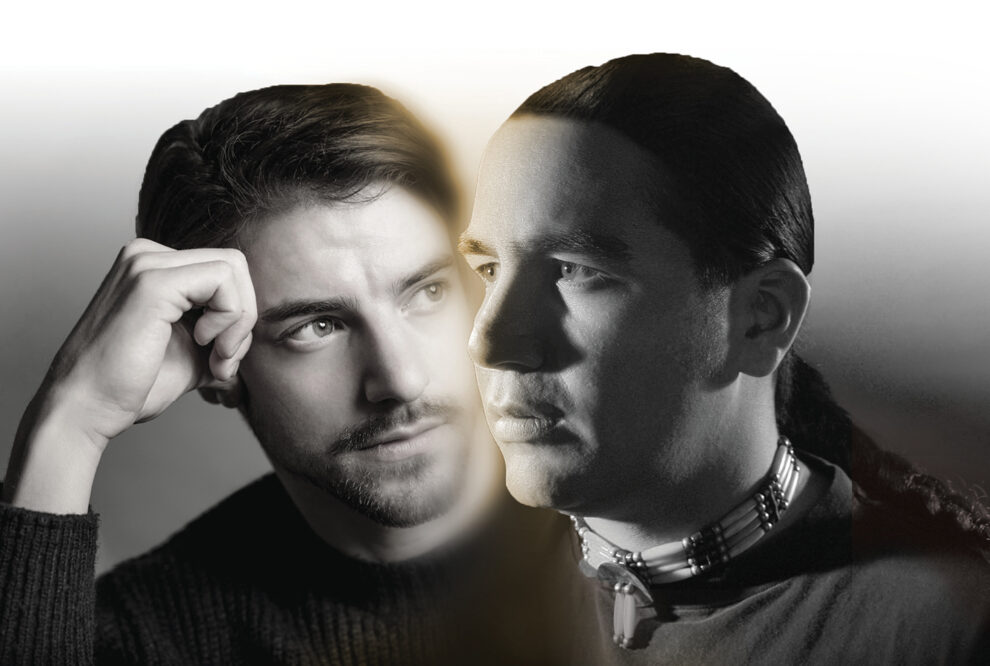 For me, as an Indigenous person, I don’t think I consider any aspects of the Truth and Reconciliation Commission all that much or all that often.

Especially for someone working where I do! How about you, your staff, and students? How much of your day, week, month, year, school curriculum or units deal with the TRC? (Actually, as someone in the education sector, you wouldn’t even need to include all of the Calls to Action, since there are only a few that deal specifically with education.) How much time and energy – or the lack thereof, for that matter – is not a judgement about me or you. I love a good chit and chat about things like this, and it might come in handy to speak with a First Nations person – so consider this an open invitation for a conversation.

I had that potentially awkward talk with my good friend Daniel Whitewalker, where we chitted and we chatted about the Indigeneity of many things. (An added feature is how I enjoy making awkward situations more awkward just by being myself.) There were some interesting perspectives to explore. We wondered if reconciliation was still in the ether and if it would remain there since it often feels too abstract and so far removed from the everyday concerns of the regular person or your typical “good” teacher. We agreed that it’s quite different when you see the oppressed being victimized daily, compared to when you only see them in movies and museums or the occasional news piece. We also touched on the vocabulary used such as victim, trauma, and oppression. We noted how some of these terms, like humour and art, seem to be more subjective than ever before. All of this makes it hard, but not impossible, to empathize with the people who can basically seem alien to you even though FNMI folks make up nearly 5% of Canada’s population, according to the 2016 census. We wondered if the targets of genocide typically don’t get reconciliation, like the Nama, Herero and San peoples of Namibia, the Armenians in Turkey, and Jews worldwide. But I digress.

I started contemplating how the TRC was completed in 2015, but we’re still coming to grips with the “truth” part of the commission, especially as more and more unmarked graves are discovered across Turtle Island. The Missing and Murdered Indigenous Women, Girls and Two-Spirited movement has seemingly stalled. The Land Back movement near my home community, Six Nations of the Grand River, remains unresolved. Policing and “Just-Us” issues still occur regularly. The treaty and fishing rights of the Miꞌkmaq or treaty and pipelines of the Wet’suwet’en are still very much in the news. It really made me wonder how much energy or effort the average Indigenous or non-Indigenous teacher could put towards bringing the reconciliation aspect into the classroom, the school, or even the staff room. How uncomfortable would they be even doing that, particularly if they’re non-Indigenous?

In case you’ve been wondering, there are 94 Calls to Action. I had to look it up to make sure that there were in fact 94. That number bugs me too: why couldn’t they get to 95 or even 100? I mean, they probably could have gone over 100 if we truly considered many of the struggles, right? Anyway, like most things, the TRC has a priority level in all our limited capacities as we try to meet the needs of our students as well as the demands laid out by the board and the curriculum. I personally don’t know how much space the TRC should take up in a day, a month, or in a person’s brain. If you ask someone who is super-woke, as well as Indigenous, the amount of effort and capacity that they have as they fight decolonization might mean that it should be happening every damn day! Should Indigenous folks just be happy with Orange Shirt Day and the wee bit of attention that such a day places on some of our history? Sure, it’s an important part of our history, but it reminds us of the negative aspects. To come from a place of strength, maybe we deserve a month? Maybe we should have a parade and weeks-long celebration like the LGBTQ2s+ folks! Several NHL teams got on board by paying homage to Indigenous culture with special jerseys and logos. In New Zealand, they have Waitangi Treaty Day in February and have been singing the national anthem in Māori and English since the late ‘90s. Hockey games have done our anthem in Cree too. I guess we are making some strides, aren’t we?

During our chat, I asked my friend Dan to tell me the first three things that came to mind when he thought about my home community. He suggested smoke shacks, cheap gas, and now pot shops: very stereotypical, unfortunately, but not wrong. So, then we delved into why those three things came to mind instead of the Champion of Champions Pow Wow, or the number of great soapstone carvers, artists, or musicians who are from Six Nations of the Grand River. What about the great lacrosse players currently earning US scholarships and professional contracts across Turtle Island along with several junior and pro hockey players? One could argue that we don’t see those things out in front of us on the daily. But then the conversation shifted to how this would be discussed in his classroom. We wondered what types of things the students would say and why. Then we also hit on the question of: “does this conversation count as reconciliation?”

Dan and I have known each other for a long time; we’ve played rugby together in New Zealand and in Ontario. More importantly, we trust each other for a variety of reasons. Just imagine if, as a non-Indigenous teacher, you were to have this conversation with an Indigenous consultant or somebody from a First Nations community near you whom you might not know as well as Dan and I know each other. Imagine if those stereotypical negative images were brought up. If such images actually did come to mind and then weren’t brought up for fear of reprisal. I would suggest that the conversation, as part of reconciliation, would start from a place that was disingenuous and lacking integrity for fear of offending the Indigenous person with the stereotypes.

This is a small example of why reconciliation is hard. Since Dan is self-aware, he knew that his first three images of my home community could and (should) be held as stereotypically negative, but because he knew and trusted me, he knew he was safe to be honest. But how does reconciliation happen if people are afraid to be honest with what they do and don’t know about First Nations communities, people, culture, history, and the many injustices that happened in our history that are still being felt today? We both knew that we had to explore the original question I had asked him about why those were the first three images that were conjured when I asked him to consider my community. And if his students had similarly negative visions of First Nations communities based on limited to no real-life experiences in those communities, how could those be reconciled with the reality? There are valid reasons to be explored about how and why there is cheap gas, why there are so many smoke shacks, and why there are so many more pot shops per capita in First Nations communities than anywhere else. Also: why are those things negative? We rarely hear about too many 7-11 type convenience stores or too many unhealthy fast-food places in non-Indigenous communities as a stereotype. Instead, one could suggest that those folks who run these places in First Nations communities are very entrepreneurial – that they are contributing to the economic positivity of their community. Or perhaps they’re conscientious caregivers who want to work from home?

I hope, that perhaps like myself, you’ve been wondering: how is the typically good, actively engaged, socially aware teacher supposed to promote the TRC’s findings and do them real justice in the classroom? There are only so many hours in a school day. I would suggest that the majority of teachers want to do a good job; they want to do the right thing, presenting factual and current information to their students to make the world a better place. However, that simple thought experiment that Dan and I just went through was a 90-minute discussion. And it could have gone longer! We didn’t even check Google or Wikipedia or any other far more rigorous and important sources. We were just trying to hash out the possibilities of a deep and meaningful truth and reconciliation conversation that could and should be happening between an Indigenous person who might be a teacher and a non-Indigenous person who also might be a teacher.

We eventually concluded that, as I mentioned earlier, everyone has limited capacities, limited time, and very different competing issues that determine their priority level throughout the day, year, month, or subject unit. I think the biggest and most important thing to come out of the conversation was that we had the conversation. And we didn’t chat on National Indigenous Day (June 21), which coincides with the summer solstice. Nor did we have it anywhere near Orange Shirt Day in September; it was just a rainy cold day in March when we had some time to connect with each other in an interesting and meaningful way. We had piqued each other’s curiosity somehow. Isn’t that how teachers are meant to be so they can pass those attributes along to their students? To be curious, to be lifelong learners, to want to have a better understanding of the world that they and their students live and participate in – all in such a way that they can nurture what is hopefully a natural human condition: that of being genuinely curious, contemplative, and perhaps concerned in an empathetic way about other people and the lives they live.

I’m hoping that what you’ve taken away from this brief article is that despite your fears, lack of time or knowledge acquisition, that you muster the courage to take a chance to contact a local native friendship centre, seek a way to find an Indigenous Elder or Knowledge Keeper who can visit your school regularly to tell a story and answer questions. On behalf of my brothers, sisters, and cousins across Turtle Island, I’m inviting you to go to a pow wow in the summer where positive Indigenous sounds, smells and images will be engrained in your consciousness. We want you there! I’m encouraging you to check out an Indigenous author, movie, TV show, music, play, artist or NFB creation. And if you have already, nia:wen, please keep sourcing those Indigenous ideas and content. It’s going to be a long walk in our moccasins and mukluks, but I’m really hoping you’re willing to take that walk with us sooner rather than later. We’re not asking you to do it all, or even all at once. We are asking that you continue to be curious and a lifelong learner – just like you’re encouraging your students to be.

Support is available for anyone affected by their experience at residential schools or by the latest reports.

A national Indian Residential School Crisis Line has been set up to provide support for former students and those affected. People can access emotional and crisis referral services by calling the 24-hour national crisis line: 1-866-925-4419.

Closing The Learning Gap
All Aboard: A rewarding career in rail awaits