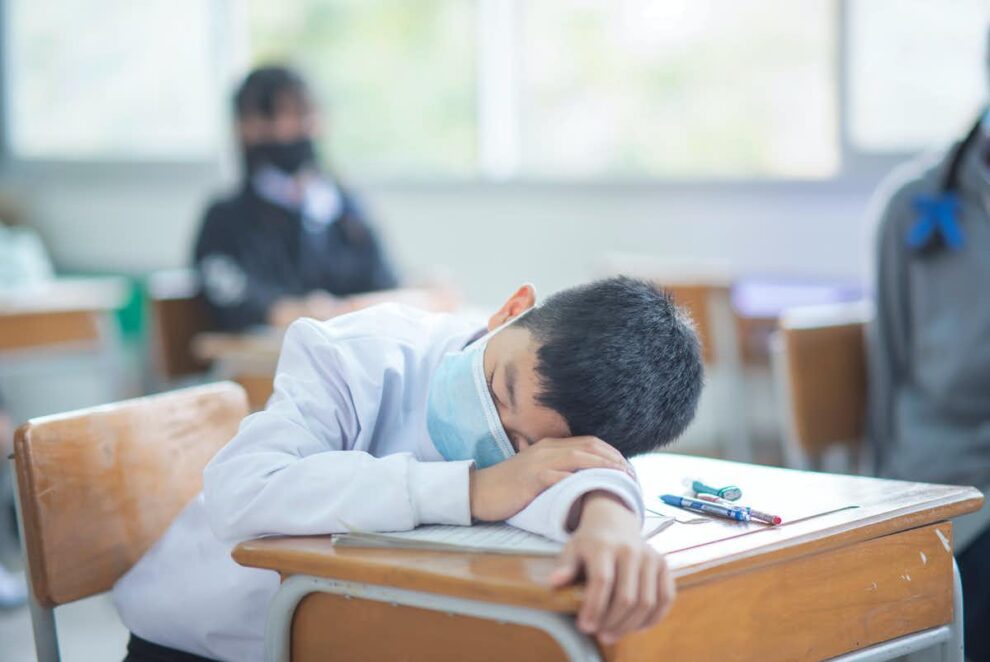 The return to in-person classrooms this fall may have the unintended consequence of depriving many Canadian high school students of sleep.

Prior to the COVID-19 pandemic, many teens were chronically sleep-deprived during the week, putting them at greater risk of poor health and more sleepiness in the classroom.

The pandemic caused an upheaval in schooling, but introduced some flexibilities in scheduling that paradoxically allowed some teens to catch up on their sleep.

Could we capitalize on this disruption to make evidence-based changes in education to improve teens’ sleep? Research suggests that doing so would help high school students have healthier and more productive years.

Concern about the damaging impacts of sleep deprivation on teens is substantial, especially because teens are still developing.

In pre-pandemic times, international studies suggested only about two-thirds of Canadian adolescents were getting the eight to 10 hours of sleep on school nights recommended for 12- to 18-year-olds, and there was a worse picture in many European countries and the United States.

Inadequate sleep is linked to a host of negative outcomes in youth, including greater risk of obesity, diabetes and hypertension as well as depression, suicidality and substance abuse. It’s also linked to deficits in attention and memory skills.

Importantly, research points to a key role for sleep in academic performance: teens who have irregular or poor quality sleep may have worse grades and be absent or late more often. Chronic sleep deprivation may not only increase a young person’s risk for health challenges down the road but also may potentially affect their career opportunities and future earning potential.

Sleep deprivation, recognized by the Public Health Agency of Canada and the Centers for Disease Control as a significant concern for public health, is alarmingly common in teens.

Contributing to teens’ vulnerability to sleep deprivation is a conflict between traditional school start times (as early as 8 a.m. in some parts of Canada) and normal developmental changes in the sleep cycle that lead the average teen feeling ready to sleep and wake about two hours later than younger children and adults.

Adding to this mix are other factors like teens’ greater independence in choosing their bedtimes and use of light-emitting screens, which, when used in the evening, can disrupt nighttime sleep and delay the body’s internal clock.

Sleep researcher Mary Carskadon has described this combination of biological, behavioural and social influences as a “perfect storm” that creates prime conditions for teens to accumulate a “sleep debt” during the school week. This makes many of them too sleepy to participate effectively in the classroom and leads to binge sleeping on the weekends.

As a way of calming this storm, some school districts have experimented with later school start times. Overall, these experiments have been largely successful, with students reporting more nightly sleep and less sleepiness in the classroom with later start times.

In view of this evidence, organizations such as the American Pediatric Society and the American Academy of Sleep Medicine recommend that high schools not start class before 8:30 a.m.

Other interventions like introducing sleep health education programs into the classroom have also shown benefits for children and somewhat for teens. For example, one study of Grade 12 students showed that short-term, classroom-based educational programming improved students’ knowledge of the role of sleep in health. These students also spent more time in bed on weeknights compared to students not receiving the programming. However, these benefits of participating in the program did not translate into changes that reduced students’ daytime sleepiness.

The conditions during COVID-19 lockdown periods opened a unique window for observing teen sleep patterns when students no longer needed to commute to the classroom. Several studies showed that teens were sleeping more because they could sleep later into the mornings, and felt more rested and alert during online schooling, suggesting that additional sleep helped them to engage in their studies.

It’s important to note that other studies reported more disrupted sleep in some teens, which may have been due in part to anxiety, depressed mood and fewer opportunities to get outside.

However, having the opportunity to rest a little later into the morning could allow teens to offset some effects of a disturbed night of sleep. Taken together, what we’ve learned both about teens sleeping more and teens’ sleep being disrupted during the pandemic adds more evidence in favour of greater flexibility in school scheduling to improve teen sleep health.

While some schools have planned schedules to accommodate things like physical distancing and class bubbles, could this be an opportunity to test out delayed or flexible school start times?

Staggering school start times across the day, for example, could offer a double benefit of allowing later-rising students to begin their school day a little later and reducing the number of students in school at any one time, thereby promoting physical distancing and perhaps better distribution of resources across the day.

School districts in some other parts of the world are undertaking this plan, and it will be exciting to see how scheduling changes play out.

Read more: How much sleep do teenagers really need?

Policy change is slow, however, so what can be done now to improve teens’ sleep health? Adopting sleep recommendations can help put healthier sleep routines in place.

Parents can’t go wrong with guiding teens through basics like turning off screens at least an hour before bedtime, encouraging regular periods of activity outside in daylight, limiting daytime caffeine intake (including energy drinks) — and trying to maintain a regular daily bedtime and wake-up time, even on weekends.

Winnipeg teen honoured with TD scholarship for making a difference