It was an unprecedented step for Hiram Walker and Sons Distillery in Windsor. For the first time in the 163-year history of the distillery, the company hired a female skilled tradesperson. Red Seal millwright and machinist Rebecca Chenier became the company trailblazer in October 2021 when she accepted the post at the legendary southern Ontario whiskey and spirits maker. However, she had to ask the question, ‘Why was I the first?’ Her conclusion, “It’s because there are not enough qualified women for the position because it doesn’t occur to them that this could be a career.”

Isn’t this a story that has been told far too often? Women not realizing that there are more options out there or—and this is the troubling part of the dynamic—that barriers are in place to block their entry into certain careers. While plenty of attention has gone into things like the
under-representation of women in certain sectors of the economy and the gender pay gap, more attention is currently shifting into how to empower women to assume roles that have traditionally been dominated by men.

The Canadian Women’s Federation (CWF) says the need to empower women has become urgent. They identify three issues that adversely affect adolescent girls. According to the CWF, adolescent girls deal with:

Right out of the gate, young women are dealing with gender specific obstacles that can stand in the way of their ability to reach their full potential. The CWF backs up their position on all three of these issues with startling statistics and evidence. There is no dispute: the students in our high school classrooms are more likely to deal with violence, mental health problems, and stereotyping than their male counterparts.

These obstacles create a slew of other problems. Women who are forced to deal with sexual assault and violence are left traumatized, impeding their development and self-worth. Adolescent girls are twice as likely to report poor or fair mental health compared to boys according to Statistics Canada (2019). Meanwhile the stereotyping and sexualization of women on broad-based and social media platforms is a societal scourge that seems to be growing. With these obstacles in place, our students face a potentially hard road to building a life of success and accomplishment.

What’s a counsellor to do?

It is important to acknowledge the reality: despite efforts to improve the situation for women in Canada, a lot of work still needs to be done. The deck is still stacked against the advancement of women while that same deck is stacked in favour of affluent (mostly white) men. How else can you explain the fact that women make eighty-seven cents for every dollar a man makes (StatsCan) despite improvements in education and awareness in society. This is not to say that the situation is hopeless; it is just a way of providing counsellors with a starting point for helping their students.

Knowing that barriers and obstacles remain in place for our female students, it is important to pursue strategies that help them recognize their potential.

The preceding section makes the situation look quite grim. In fact, things are improving steadily for our female students thanks to the evolving efforts of organizations and people who are actively seeking to bridge the gender gap. An important way to help our students reach their potential is to instill belief. In terms of adolescent girls, one of the keys is to encourage them to broaden their horizons and believe in themselves.

Perhaps the best way to facilitate belief is through role modelling and championing. The CWF have studied the impact of women’s leadership as a powerful way of inspiring others. They site a KPMG study that found:

Certainly, the leadership study tells a much bigger story. For our students, seeing women succeed, and how they behave in successful situations, is a major influence on shaping the direction and trajectory of how they will live their lives.

Counsellors can facilitate role modelling by reaching out to successful women for mentoring events or arranging career days for young women. Seeing is believing, and young women need to see success if they hope to one day experience success.

A national leader in women’s advocacy, Build a Dream works with schools as part of their mandate. Their goal: to encourage young women to look beyond the traditional (expected?) and think about professions like the skilled trades, STEM, emergency response, and entrepreneurship—all careers in which women could thrive given the encouragement and opportunity. They want to help women believe that they can pursue any path, not just the ones society expects them to follow. Build a Dream founder and CEO, Nour Hachem Fawaz say, “I often say: you can’t be what you can’t see. We talk a lot about getting women into leadership roles in areas in which they are significantly underrepresented. We do that not only by empowering young women, but also by encouraging companies and educators to change their approach and the lens through which they see workforce development, understanding that tapping into ‘the other 50% of the population’ is both an ethical and sound economic policy.” The data supports this perspective: According to a McKinsey Global Institute study, equal participation of women in the workforce will improve Canada’s Gross Domestic Product by $150 billion by 2026.

Confidence is the belief (there’s that word again) that you are capable of accomplishing something. It is a delicate state of mind that is easily derailed given the wrong set of circumstances. The CWF has six tips for parents raising young women that counsellors could easily adopt to help instill confidence in students:

These six tips are a road map to building confidence. Knowing that life can be difficult for young women as they navigate through adolescence, guidance counsellors can patiently help their students build a sense of confidence simply by listening, guiding, and encouraging.

A lesson in confidence

Martha Piper and Indira Samarasekera broke through the glass ceiling and left their mark on the academic and business world. Piper wound up earning the role of president of the University of British Columbia before taking corporate leadership positions at the Bank of Montreal and Shoppers Drug Mart. Samarasekera was president of the University of Alberta before taking top jobs at the Bank of Nova Scotia and Magna International. They describe having to be over-prepared for virtually every encounter in the male dominated world of academia and business in their book Nerve: Lessons on Leadership from Two Women Who Went First. For Piper and Samarasekera, nerve is the belief that you can step up, take on tasks that challenge you, and succeed. They say nerve is “being able to overcome some of those things that have traditionally kept us from assuming responsibility.” Nerve is having the confidence to know that your every move is being scrutinized and having the strength of character to make the tough decisions. It is also the ability to recognize that you’re going to make mistakes and rallying after those mistakes have been made. Put more simply: nerve is courage; nerve is confidence. The punctuation mark on this point comes from the example set by Piper and Samaraseker, an example that says, “We did it. So can you.”

It’s important to note that the obstacles mentioned earlier—the ones that can hold young women back like sexual assault, violence, mental health issues, and stereotyping—often translate into workplace barriers that impede a woman’s professional growth. Those barriers can present themselves as a lack of access to opportunities and good jobs, recruitment bias, an inability to advance within a company, an income gap, a lack of access to childcare, and an unsafe or unwelcoming work environment.

When Kirsten Marcia started her career two decades ago, she recalls a pivotal moment. She was working as a geoscientist doing underground mapping of a Saskatchewan gold mine. She thought she was doing a good job until she got fired. The reason: older, male miners thought she was bringing bad luck to the project. Dismissed by superstition—kind of felt like the Dark Ages to Kirsten Marcia.

Instead of giving up, Marcia pursued her career with a relentlessness that set her apart. Today she is CEO of DEEP Earth Energy Production Corp, an industry leader in geothermal and the emerging clean energy sector. Reflecting on her experience, Marcia says, “It’s such a refreshing tailwind, compared to the headwind that I had early on in my career when I was literally not allowed to be underground.” Marcia broke through the barriers placed in her way and emerged as an industry leader. Through a combination of belief and confidence—and a ‘no quit’ sense of tenacity—Kirsten Marcia let the world know that she was a force to be reckoned with.

All that has been written so far puts the ascension of Rebecca Chenier, the millwright we met at the start of this article, in perspective. A single mom with three children, she switched careers to pursue training as a millwright. Chenier smashed through the barriers and stereotypes that may have stopped her in her tracks. Her message to other women is clear: there’s more out there than you think.

The young women who visit our guidance offices can look to the examples set by Martha Piper, Indira Samarasekera, Nour Hachem Fawaz, Kirsten Marcia and, of course, Rebecca Chenier as the story of ‘what could be.’ They can use their efforts to find motivation to pursue paths they may not have considered before. And guidance counsellors can bear witness to these courageous efforts knowing that they are part of the changing landscape of the Canadian economy and, by extension, society. 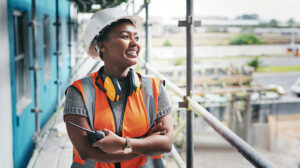 All The Support They Need