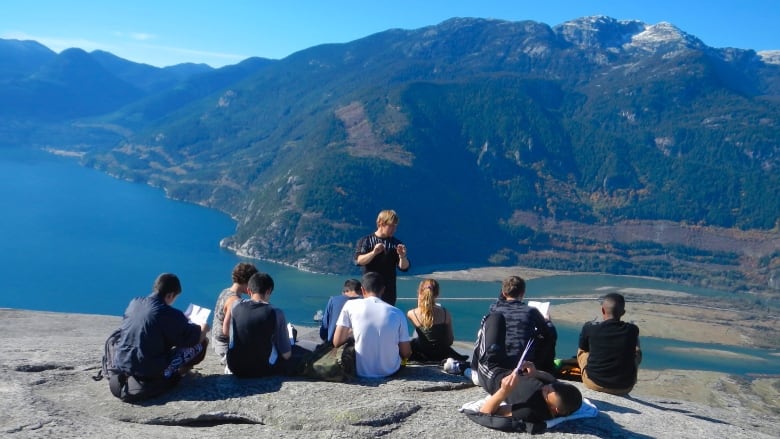 “It shapes me in many ways and kind of set me up for a better future.”

This is how Rachel Ennis describes her experience with Take a Hike, an alternative high school program in partnership with B.C. public schools that provides vulnerable youth with mental health and emotional well-being support while also engaging them in outdoor activities.

Ennis participated in the program in Vancouver from Grade 10 until her graduation in 2016. Before she joined Take a Hike, she was a student at a public high school on the city’s West Side where her life had not been easy.

“I was struggling a decent amount with my mental health, ” said Ennis in an interview on CBC’s The Early Edition. “A lot of anxiety in school just became really difficult and not-doable for me. It was too much all at once.”

Then her rock climbing coach told her about Take a Hike and she decided to give it a shot.

It was at the admission interview that she met Take a Hike’s Pete Prediger, who she credits with helping her get back on track.

Prediger had worked in private practice as a clinical counsellor for a year before working with Take a Hike students. At first, he did not think he was ready to help 20 teenagers for a full year, which also meant going with them on multiple overnight wilderness trips.

“I didn’t feel like I could be creative in how I engaged them,” said Prediger.

But Prediger, like Ennis, decided to take the leap. And as weeks and months passed, the vulnerable teens he was counselling saw him in some vulnerable times too.

“Rachel would know if I was a grumpy at times and hungry,” said Prediger, adding it was hard to hide it when you are together 24 hours a day on wilderness trips​, unlike when he saw patients for a 50 minutes a week when he practiced privately.

“He gave me the freedom and liberty to make my own decisions and treated me more as a person and less as a problem. I wasn’t something to fix,” said Ennis.

Ennis is now studying at Langara College and plans to complete a social work degree at the University of British Columbia.

Her plan is to work with vulnerable youth in the foster care system.

“I had a couple of friends in the foster care system and I know that it’s a system that has a lot of issues,” said Ennis, who is inspired by the support Prediger showed her.

“It’s important to me to choose a career path that’s going to make a difference.”

Prediger is excited about Ennis’s plan for her future.

“It’s incredibly rewarding,” he said. “Maybe I don’t see change right away, but it’s the seeds that are planted … during that time when she was in high school, which is incredibly informative.”

Take a Hike launched its first program in Vancouver in 2000. It operates five programs for students in Grades 10 to 12 in Vancouver, Burnaby, Trail, Delta and Nanaimo.